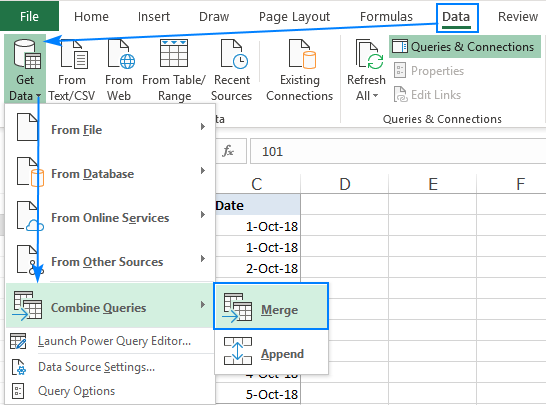 In a previous post, I explained how to parse a semi-structured flat file with the help of a range-join. When you just have a few thousand lines in your semi-structured flat files, this is working really well but when your files is going bigger and bigger, this strategy starts to collapse and is really slow. Hopefully, Chris Webb explained in recent blog post how adding a primary key to a table could help to improve the performances of a merge. I wanted to test that on my set this specific case.

Merge in Power BI in Power Query Editor. The second part of the exercise is to find colors based on Item ID for your shiny new appended table. We will use the previous result query “Appended Tables” as input for the next steps. So let’s locate the Merge button. Again, click the little triangle to see what options you have. In case the headers are different, Power Query will combine and create all the columns in the new table. If the data is available for that column, it will be shown, else it will show null. You May Also Like the Following Power Query Tutorials: Combine Data from Multiple Workbooks in Excel (using Power Query). Merge Tables using Inner and Anti Joins in Power Query Posted on December 23, 2015 by Ken Puls Last week’s blog post on merging tables using Outer joins has proved to be pretty popular.

I started to work on my previously created table categories that was in this state.

I could have created a primary key on this table with any column but I’ve serious doubt that it would result in any improvement of performances. Main reason is the usage of a custom range-join and not a merge provided by the M language. To work-around that I decided to change the structure of my table and use a classical merge function. In place of having one row for each category with the bounds of this range as fields, I want to have one row for each value between the bounds. My table will be larger but I’ll be able to use a traditional merge. The final result is the following:

To achieve that result, I created a function to generate a list of numbers contained between the lower and the upper bound given by the two fields Start Range and End Range. I added this list as a new column of my existing table.

And to be sure that a primary key was added to my table, I added a step to remove the duplicates based on my new 'list' column.

Then on my main table participants I replaced thejoin-range by a native merge (Merge queries in the UI or NestedJoin in the code) using this new column.

And you know what? I'm happy … performance has improved from a laborious 'more than 3 minutes' to a wonderful 'less than 15 seconds'.

A merge queries operation joins two existing tables together based on matching values from one or multiple columns. You can choose to use different types of joins, depending on the output you want.

You can find the Merge queries command on the Home tab, in the Combine group. From the drop-down menu, you'll see two options:

The position—left or right—of the tables becomes very important when you select the correct join kind to use.

After you've selected both the left and right tables, you can select the columns that drive the join between the tables. In the example below, there are two tables:

Although this example shows the same column header for both tables, this isn't a requirement for the merge operation. Column headers don't need to match between tables. However, it's important to note that the columns must be of the same data type, otherwise the merge operation might not yield correct results.

You can also select multiple columns to perform the join by selecting Ctrl as you select the columns. When you do so, the order in which the columns were selected is displayed in small numbers next to the column headings, starting with 1.

For this example, you have the Sales and Countries tables. Each of the tables has CountryID and StateID columns, which you need to pair for the join between both columns.

First select the CountryID column in the Sales table, select Ctrl, and then select the StateID column. (This will show the small numbers in the column headings.) Next, perform the same selections in the Countries table. The following image shows the result of selecting those columns.

After selecting OK in the Merge dialog box, the base table of your query will have all the columns from your left table. Also, a new column will be added with the same name as your right table. This column holds the values corresponding to the right table on a row-by-row basis.

Currently, the Power Query Online experience only provides the expand operation in its interface. The option to aggregate will be added later this year.

A join kind specifies how a merge operation will be performed. The following table describes the available join kinds in Power Query.

You use fuzzy merge to apply fuzzy matching algorithms when comparing columns, to try to find matches across the tables you're merging. You can enable this feature by selecting the Use fuzzy matching to perform the merge check box in the Merge dialog box. Expand Fuzzy matching options to view all available configurations.

Fuzzy matching is only supported for merge operations over text columns.