HOMECOMING Season 2 is finally out on Amazon’s Prime Video. The second season of the thriller series is even darker than the first one. This time, we focus on a new lead character portrayed by Janelle Monáe. Read more in our Homecoming season 2 review here!

Homecoming is an American psychological thriller television series, based on the Gimlet Media podcast of the same name created by Eli Horowitz and Micah Bloomberg, that premiered on November 2, 2018, on Prime Video.

Homecoming Season 2 is finally out on Amazon’s Prime Video. Season 1 came out in November of 2018, so we’ve been waiting for a year and a half to see how the story continues.

From the very beginning, the plot is much more linear in season 2. Also, this second season is darker as we’re following the story of a lead character played by Janelle Monáe. She wakes up in a rowboat placed in the middle of a lake. In true Homecoming form, she has no idea where she is or even who she is.

Just as Julia Roberts and Stephan James starred in season 1 of Homecoming (read my review over at Womentainment here), Janelle Monáe is the star of season 2.

Most probably know Janelle Monáe best as a singer, but she has been part of some amazing movies in recent years. She co-starred in the Academy Award-nominated movie Hidden Figures and the Academy Award-winning Moonlightboth from 2016. For horror fans, her upcoming movie is probably the most interesting credit since it’s the horror movie Antebellum.

With no memories whatsoever, she has to piece together what’s going on. Obviously, while having no idea who she can trust. And she quickly learns not to trust anyone!

Starring alongside Monáe in season 2 of Homecoming is the always amazing Chris Cooper. Prior to this series, he was also in the Stephen King 11.22.63 series adaptation. I didn’t exactly love that adaptation due to the many changes from the book. But Chris Cooper is always good.

Also, we have Hong Chau returning. She also co-starred in season 1 in a smaller role and more recently, you’ve probably seen her in the HBO series Watchmen. If you still haven’t watched it, then we highly recommend it. The beginning is a bit tough, but the reward in the final half is definitely worth hanging in there for!

In season 2 of Homecoming, Hong Chau almost co-stars with Janelle Monáe. Finally, Stephan James is also back as Walther Cruz and will play a huge part in the plot of this season. Especially in the final half of the season, he has quite a lot of screen time.

Finally, I should mention that from episode 4, we get Joan Cusack onboard which is always a huge bonus in my book. Of course, her character is absolutely brilliant. There are many other brilliant actors and wonderful characters – both small characters and much bigger, but I don’t want to give away anything for this thriller mystery. 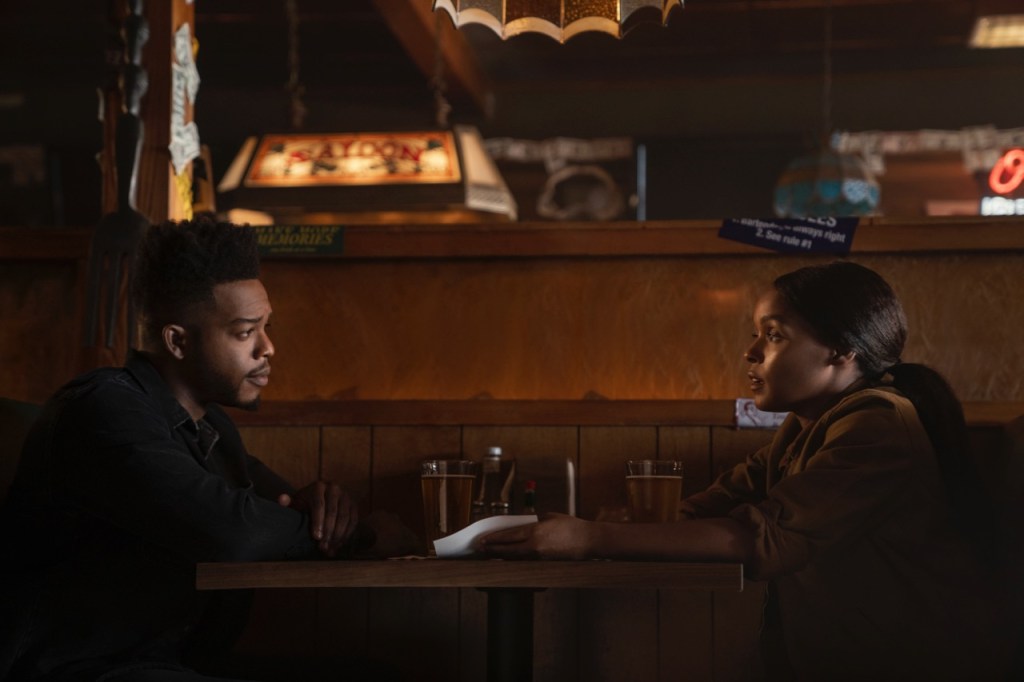 I will, however, say that we get a much more linear approach with season 2. With season 1 of Homecoming, there were a lot of flashbacks mixed in with the present in terms of storytelling. It worked perfectly, but still, I’m happy that they’re nothing starting out the same way. For me, this makes sure that each season can stand on its own.

You really should watch season 1 before getting into this season though. The two are very much connected since many plot points from season 1 continues directly into the plot of season 2.

From episode 3, we begin a long flashback to tie season 1 and season 2 together. The story still continues in a linear fashion from episode 3 to the very end of the season with the final episode 7 being an alternative take of episodes 1 and 2. Now that you know more, the events will have a different meaning and you will see details you didn’t the first time around.

Confused? You shouldn’t be after watching all seven episodes. Also, I should mention that the final moments of season 2 are absolutely brutal… in a very passive-aggressive way almost.

Season 2 consists of 7 half-hour episodes and all are directed by Kyle Patrick Alvarez. Previously, Kyle Patrick Alvarez has directed on both TV series and movies. He did the 2015 version of The Stanford Prison Experimentwhich earned several awards and great reviews from both critics and audiences.

Just as with season 1, the episodes are written by creators Micah Bloomberg and Eli Horowitz. The two are also still executive producers on the series. As are both Sam Esmail (creator of Mr. Robot) and Julia Roberts on board as executive producers. Julia Roberts was, of course, the star of season 1 alongside Stephan James, who still plays a key character in season 2.

If you enjoyed season 1 of this Amazon series, then I cannot imagine you won’t like season 2 as well. It’s a huge mystery that slowly unravels. And yes, you will probably guess some plot twists along the way (I know I did), but it takes nothing away from enjoying this crazy journey!

Season 2 of Homecoming is out with all seven episodes on Amazon’s Prime Video from May 22, 2020.

Homecoming returns for its second season with new twists and an exciting new star, Janelle Monáe. Her character wakes in a rowboat adrift a lake, with no memory of how she got there — or even who she is. Her ensuing search for identity will lead her into the heart of the Geist Group, the unconventional wellness company behind the Homecoming Initiative.

The new European data protection law requires us to inform you of the following before you use our website:

We use cookies and other technologies to customize your experience, perform analytics and deliver personalized advertising on our sites, apps and newsletters and across the Internet based on your interests. By clicking “I agree” below, you consent to the use by us and our third-party partners of cookies and data gathered from your use of our platforms. See our Privacy Policy and Third Party Partners to learn more about the use of data and your rights. You also agree to our Terms of Service.