War movies are thrilling to watch as they depict the bravery of the people who risk their lives to protect their county. ‘Hacksaw Ridge’ is a biographical war drama film directed by Mel Gibson. It is based on the 2004 documentary titled ‘The Conscientious Objector’. As the title of the documentary suggests, the film is based on the life of an individual who objected to the military’s rules based on his faith.

Basically, we are introduced to Desmond Doss and his experiences during World War II. Doss was an American pacifist combat medic. However, since he was a Seventh-day Adventist Christian, he refused to carry any kind of firearm. Being a part of the greatest war the world has seen, without a firearm, seems kind of strange; but Doss stood apart due to his acts of courage. In fact, he became the first conscientious objector to win the Medal of Honor, for service above and beyond the call of duty during the Battle of Okinawa. Upon release, ‘Hacksaw Ridge’ received critical and commercial success, which must make you wonder where you can see the film. We are here to tell you, but before that, let us walk you through the plot of ‘Hacksaw Ridge’.

What is Hacksaw Ridge About?

‘Hacksaw Ridge’ starts by showing Desmond Doss at a young age in the 1920s, in rural Virginia. He almost kills his little brother, Hal, while roughhousing. The event, combined with his Seventh-day Adventist upbringing, reinforces Desmond’s belief in the commandment that ‘Thou Shalt Not Kill’. Years later, when Desmond takes an injured man to a hospital, he meets a nurse named Dorothy Schutte. The two begin a romance and Desmond reveals his interest in medicine to her.

After Japan’s attack on Pearl Harbor, Doss enlists as a combat medic. This upsets his father, who himself is a veteran of World War I. Nonetheless, Doss goes, but before that, he asks Dorothy’s hand in marriage and she accepts. Doss is placed in training under Sergeant Howell’s command. Although he excels physically, he still becomes an outcast among the soldiers due to his refusal to handle firearms or train on Saturdays. Howell along with Captain Glover attempt to have him discharged for psychiatric reasons, but are overruled since religious beliefs are not considered to be mental illness. Subsequently, Doss is put through grueling training to get him to leave. One night his fellow soldiers beat him up as well, but the man continues training, refusing to identify the perpetrators.

Once Doss completes his training, he is released on leave during which time he intends to marry Dorothy. However, he is arrested on the charges of refusing to carry a firearm. While his court-martial is taking place, Doss goes against the suggestions to plead guilty, refusing to compromise on his religious beliefs. He receives some help from his father, who carries a letter from his former training officer, who is now a brigadier general. The letter states that Doss’ pacifism is protected under the US Constitution. As a result, Doss is released and is free to marry Dorothy.

Doss finally gets to witness the action as he is made part of the 77th Infantry Division and asked to relieve the 96th Infantry Division, whose job is to secure the Maeda Escarpment (Hacksaw Ridge) in the Battle of Okinawa. During the initial battles, there are heavy losses on both sides, but Doss manages to save quite a few lives, including that of Smitty, a fellow soldier. He earns the man’s respect and also reveals to him that his unwillingness to carry firearms stems from the fact that he almost shot his father when he had threatened his mother with a gun. The next morning, the Japanese hit back and the Americans are in trouble.

However, Doss is not one to give up and shows immense courage, saving the lives of several soldiers. The Americans are all impressed by Doss and his captain tells him that they plan to take back the ridge on Saturday and need Doss fighting alongside them. The attack is held off till Doss completes his prayers and when it does take place, the Americans ultimately win the battle. Doss is injured by a grenade but survives. At the end of the film, we see archival photos and footage of Doss winning the Medal of Honor from President Harry S. Truman. It is revealed that he remained married to Dorothy and passed away in 2006 at the age of 87.

Is Hacksaw Ridge on Netflix?

Netflix has a fantastic collection of films and television shows which sets it apart as a premier content provider. Unfortunately, ‘Hacksaw Ridge’ is not on Netflix but you can check out ‘Beasts of No Nation‘, a wonderful film that depicts the gritty reality of child soldiers and the actual cost of a war in some countries.

Is Hacksaw Ridge on Hulu?

Hulu has an amazing collection of films and television shows and the platform just keeps making smart additions all the time, in order to stay ahead of the competitors. Though ‘Hacksaw Ridge’ is not on Hulu, you can check out ‘Grave of the Fireflies‘. Admittedly, it is a very different kind of war movie. It gives the perspective of how civilian life is disrupted during the war, and is a touching tale that takes place during World War II.

Is Hacksaw Ridge on Amazon Prime?

Amazon Prime has an enviable collection of films and television shows that can perhaps only be bested by Netflix. Though ‘Hacksaw Ridge’ is not available to Prime subscribers as is, you can rent or buy and watch the movie on the platform. The SD and HD versions cost $3.99 to rent and $6.99 to buy. Unless you’re bent on keeping the movie in your library, we recommend renting. Check it out here.

Where Can I Stream Hacksaw Ridge Online?

Where Can I Watch Hacksaw Ridge Online For Free?

Sorry freeloaders, but there is no way to stream ‘Hacksaw Ridge’ for free using legal means. You have to wait until it arrives on one of the platforms that has trial periods. However, we would like to urge our readers to pay for all the art that they consume.

8
A heartfelt, moving war film that has the courage of its convictions.

“I don’t know how I’m going to live with myself if I don’t stay true to what I believe.” That’s Desmond Doss (Garfield) in Mel Gibson’s Hacksaw Ridge. Religion and Mel Gibson, it’s safe to say, don’t always go well together, particularly off-screen, where his views and comments in recent years have been problematic at best. But Hacksaw Ridge, which saw the filmmaker welcomed back in the Academy Award nominee field this year, reveals how integral the director’s religious faith is to his work – and the result, thanks to Andrew Garfield’s performance, is a deeply moving piece of cinema. 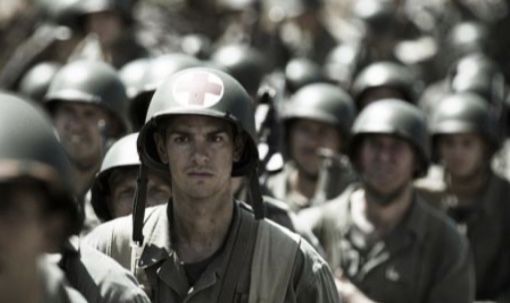 Doss is a pacifist who cannot bear the thought of picking up a gun and shooting someone. But as a patriotic American, he also cannot bear the idea of doing nothing in response to the attack on Pearl Harbour. And so he enlists in the army, hoping to be a medic and contribute that way. The only problem? Everyone else in the army doesn’t quite see things the same way

The result is the highly familiar montage of bootcamp training sequences, complete with shouting drill sergeants and bullying bands of brothers. But there’s a fresh sense of struggle to the conventional underdog tale, as Doss grins and bears the questioning, mocking and shunning of those who do not understand his view. That view is simplistic, but unabashedly so – and Andrew Garfield delivers it with a straight-faced sincerity that is hard to fault. What might have been cliched in other hands is made endearingly genuine by the former Spider-Man. Between this and his turn in 99 Homes, Garfield is quietly reminding us why he is one of the best actors of his generation, web-slinging or no web-slinging. 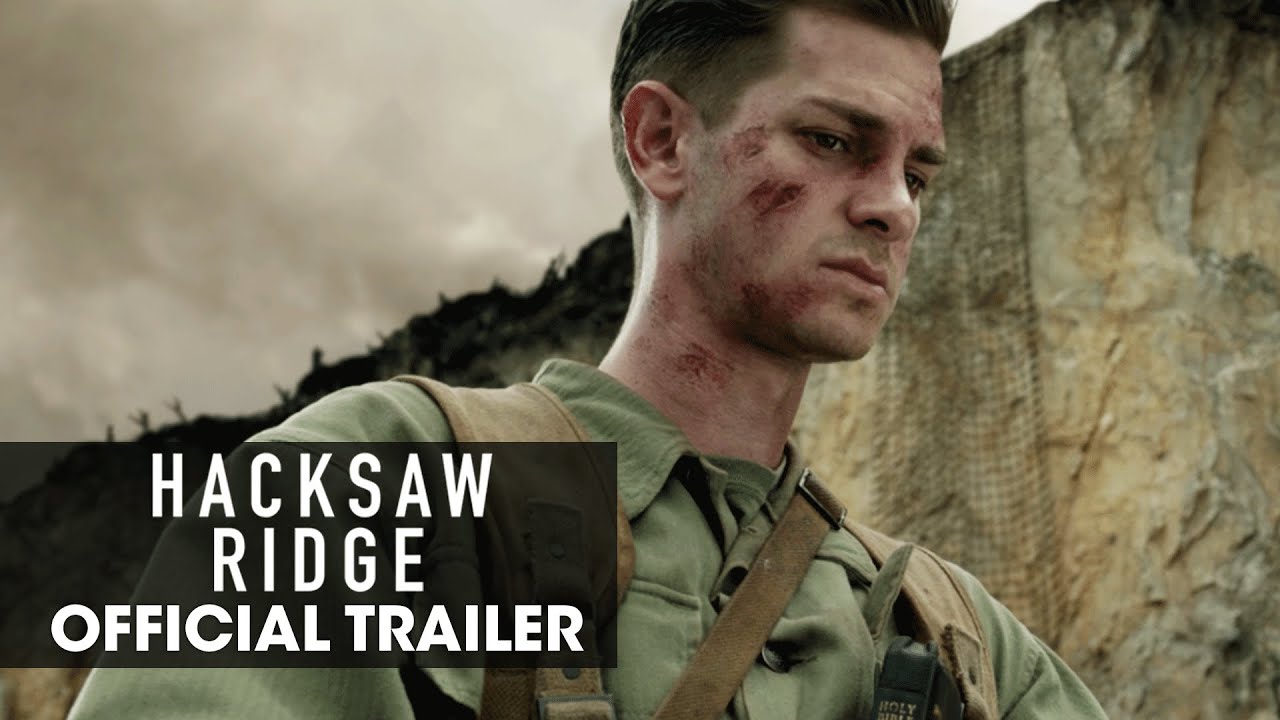 He’s contrasted beautifully by Hugo Weaving as his alcoholic, disheveled dad, who fought in WWI and has never been the same since. Their complex relationship, which is slowly unpicked in flashbacks and restrained conversations, helps to frame Doss’ naivety against the cruel impact of war – a brutality that Gibson offsets with bright, colourful pastorial images of Doss’ hometown and his sweetheart, local nurse Dorothy (Teresa Palmer).

If that sounds like a jumble of ideas and styles, you’d be right: Robert Schenkkan and Andrew Knight’s complex screenplay finds room not just for cute romance, idealistic speeches and gruff psychological trauma, but also a surprising sense of humour. That comes courtesy of a scene-stealing Vince Vaughn as Sgt. Howell, who barks his way through a funny role as a tough officer, unafraid to lighten the mood without skimping on the strict, intimidating nature of the conflict at hand.

Where To Stream Hacksaw Ridge

The conflict, when it does come, is as horrifying as it gets, with hordes of troops thrown into the titular ridge on Okinawa to face off Japan’s fanatic forces. Blood, grenades, corpses and swords combine to make for a nightmarish hellscape that doesn’t skimp on the violence. That predilection for sadistic gore will be familiar for those who have seen Gibson’s previous work, but it’s the director’s faith that gives Hacksaw Ridge its heart – a sincere appreciation of Doss’ certitude, from his stations-of-the-cross-style battle to his simple pleas for God to help him save one more soldier in Okinawa. Unlike Passion of the Christ or even Braveheart, this story’s hero doesn’t take on physical suffering, or kill others to prove their theological mettle, but does so by a less problematic refusal to bear arms. The result is an impressive piece of blockbusting that uses tropes of the genre with a confident juggling of tones – most of all, unashamed sentimentality. An epilogue featuring interviews with talking head survivors of the real events ventures a step too far into righteous territory, but while we’re on Hacksaw Ridge, this is a heartfelt, moving war film that has the courage of its convictions.

Hacksaw Ridge is available to watch online on Amazon Prime Video as part of a Prime membership or a £5.99 monthly subscription.

Where can I buy or rent Hacksaw Ridge online in the UK? 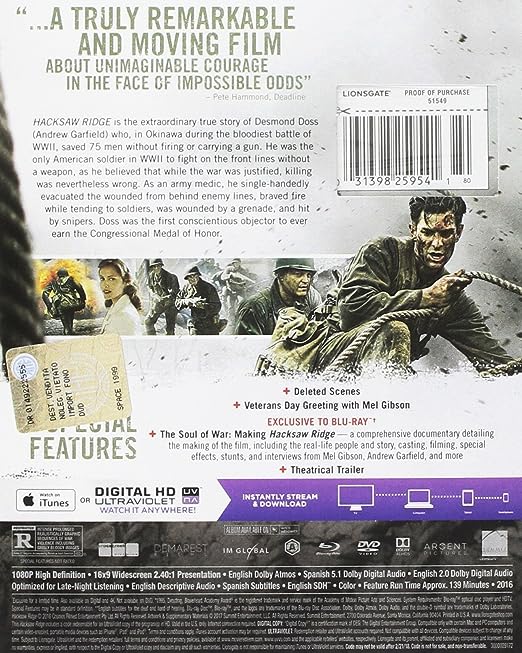