A weekly round-up of the new movies and TV series on Netflix, Crave, Amazon Prime Video, Disney Plus / Star, CBC Gem and Tënk

It’s perhaps a controversial choice as my most anticipated streaming release of the week, but season 2 of the bonkers reality show The Circleis definitely what I’m most excited about this week. The show — which centres around contestants who can only communicate via a social network called The Circle — drops its second season on April 14. Jamie Foxx stars in Dad, Stop Embarrassing Me!a sitcom based on his own life that premieres on Netflix on April 14. Dylan O’Brien (Teen Wolf, The Maze Runner) and Jessica Henwick (Game of Thrones, Iron Fist) star in the post-apocalyptic action-comedy Love and Monsters(April 14). The film was released in theatres in the States but is being distributed by Netflix around the world. Somewhat interesting tidbit: Love and Monsters was also nominated for an Oscar for Best Visual Effects, which would seem inconceivable in a non-pandemic world.

Melissa McCarthy and Octavia Spencer star in Thunder Force(April 9), a superhero comedy written and directed by McCarthy’s husband and frequent collaborator Ben Falcone. Ride or Dieis a psychological thriller from Japanese director Ryuichi Hiroki (River, Kabukicho Love Hotel) that premieres on April 14, while true-crime doc Why Did You Kill Me?focuses on the family of a young woman killed in a gang-related shooting and their search for answers. In terms of non-original movies, highlights include Godzilla: King of the Monsters, the Dennis Quaid / Megan Good thriller The Intruder, the showbiz satire The Stand-Instarring Drew Barrymore as a Hollywood star and… Drew Barrymore as her sinister stand-in, and the Charlie Plummer-starring YA drama Words on Bathroom Walls.

Amazon has two new comedy specials from Australian comedians Celia Pacquoia and Zoe Coombs Marr dropping today, April 9. Also out today is a new horror anthology series called Them, which sounds suspiciously similar to Lovecraft Country. Next week you can catch the real-time crime thriller Line of Dutystarring Aaron Eckhart and directed by frequent helmer of cheap Bruce Willis movies Steven C. Miller, as well as the Lupita Nyong’o horror comedy Little Monsters — both are out April 13. Finally, you can catch the first four seasons of Superstoreas of April 15. 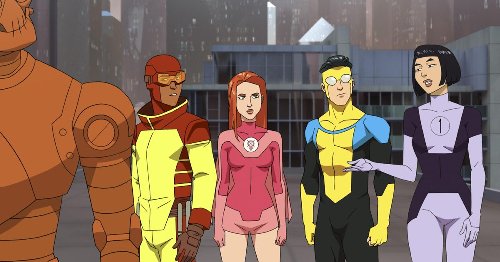 The Neversis a new HBO show (created by persona non grata and general shithead Joss Whedon) that combines the two biggest trends in prestige TV: it’s a Victorian period piece about a gang of women with supernatural powers, which is so on the nose it seems like a joke. The show stars Laura Donnelly (Outlander, Tolkien), Olivia Williams (The Sixth Sense, Rushmore), Ben Chaplin (Birthday Girl, The Dig) and Nick Frost (Shaun of the Dead, Hot Fuzz). The Nevers starts its weekly airings on April 11.

New on Disney Plus / Star

Star has the streaming premiere of Nomadland, currently the frontrunner for the Oscars later this month. Frances McDormand stars as a woman who, having lost everything during the Great Recession, begins wandering America as a nomad. The film is also in Montreal theatres as of today. Amongst the older movies hitting the service today, you can count the ’90s two-hander Man of the Housestarring Chevy Chase and Jonathan Taylor-Thomas and all three Alvin and the Chipmunksmovies.

The homegrown documentary platform presents a selection of five films curated by philosopher Alain Deneault, including Mathieu Roy’s The Dispossessedand the 1978 French documentary His Master’s Voice.

Lolly Adefope (Shrill) and Mathew Baynton star in Ghosts, a British sitcom about a couple who move into a haunted mansion only to find that the ghosts who live in it are extremely needy. It premieres today on the CBC’s online platform. As of the same day, you can watch the documentary The Dog Doc, about veterinarian Marty Goldstein. On April 14 you can catch The Secrets She Keeps, an Australian thriller about two pregnant women who become intertwined despite their very different lives. ■

A weekly round-up of the new movies and TV series on Netflix, Crave, Amazon Prime Video, Disney Plus / Star, CBC Gem and Tënk